Our Dentists in Astoria, NY and Bayside, NY

When looking for dental care in Astoria or Bayside it is vital to choose the right professional. Our experienced dentists Irene and Alexander Bokser are dedicated to providing exceptional and personalized care that Precision Dental is well known for. Along with dedicated staff, Dr. Irene and Dr. Alexander work together to offer effective and high-quality treatment for a variety of dental problems.

We take a unique and personalized approach to every patient. During your visit to the Precision Dental Office, our specialist will conduct a comprehensive examination to choose the type of treatment that will meet all your needs. 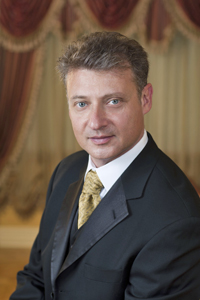 Born in Russia, Dr. Alexander Bokser immigrated to the United States at the age of ten. Settling in Kew Gardens Queens, Dr. Bokser graduated from Queens College with a B.A. in Economics. He then received his degree from New York University College of Dentistry in 1994, where he was licensed by the New York State Board of Regents, and the North East Regional Board of Dental Examiners.

Dr. Bokser completed his residency at Flushing Hospital, which was associated with Albert Einstein School of Medicine in 1995. Afterwards, he was asked to join the Hospital as an attending, where he has been teaching ever since, assuming the role of educator and mentor.

Dr. Bokser has been in private practice since 1996 in Astoria, Queens. Dr. Irene Bokser, Diplomate of the American Board of Periodontology, joined the practice in 2009. She maintains her own practice in Bayside, Queens. The focus of their practice is on oral rehabilitation, implants, cosmetic dentistry, periodontics, and general dentistry.

Dr. Alexander Bokser has received numerous awards in dentistry and community service, and is a member of:

Dr. Bokser resides in Long Island, NY with his wife, Dr. Irene Bokser, and two children. He enjoys photography, outdoors and travel, and most of all, spending time with his family.

Dr. Irene Bokser, Diplomate of the American Board of Periodontology, specializes in conservative treatment of gum disease, including cosmetic procedures to enhance smile, and dental implants to replace single or multiple missing teeth. Dr. Bokser performs all aspects of periodontics and implantology. She also diagnoses and treats oral pathology.

She is an attending physician at New York Hospital of Queens, as well as clinical associate professor at New York University’s Rosenthal Institute for Aesthetic Dentistry.

She is also co-President of North Queens Study Club.

Schedule Appointment with Dr. Bokser
Back to Top